Playstation 4 and PS Vita to be Bundled Together

When Sony revealed the Playstation 4 last summer, they mentioned that the system would incorporate Remote Play, which synchs the PS Vita to the PS4. Vita owners can play their PS4 games off-screen, which Sony hopes will be a big selling point. Think of it as Sony’s answer to Wii U’s tablet controller. With Remote Play, one would assume that Sony wold offer a bundle including the console and the PS Vita. Assume no more. 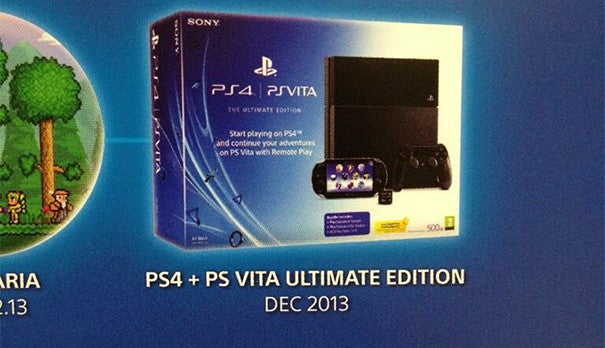 MCVUK confirms that Sony will release an “Ultimate Bundle” before Christmas, at least in the UK. “We’re really excited for Vita as we move into Christmas,” said senior product manager Ben Law. “We’ve got a great campaign with key messaging around new releases like Tearaway, the ever-growing game catalogue and the Remote Play service.”

It only makes sense that they bundle the Vita with the PS4 if they are promoting the Remote Play function. Anything to make the Vita relevant in the gaming world, am I right? The pricing for the “Ultimate Bundle” is speculated to be around $500 (£325), a hundred dollars more than the buying the console itself. However, Sony has yet to confirm a price, nor have they said anything about a release in the States. For now…

3.9k Views By Agents of Geek

Video Games on Sale for Holidays

Ramping Up Anticipation for BACK TO THE FUTURE’s 30th Anniversary

7 of the Best Superhero Games Ever Made

206 Views By Agents of Geek

Playstation 4 and PS Vita to be Bundled Together